Civitavecchia  is a town and comune of the province of Rome in the central Italian region of Lazio. A sea port on the Tyrrhenian Sea, it is located 80 kilometres (50 miles) west-north-west of Rome, across the Mignone river. The harbour is formed by two piers and a breakwater, on which is a lighthouse. The name Civitavecchia means “ancient town” 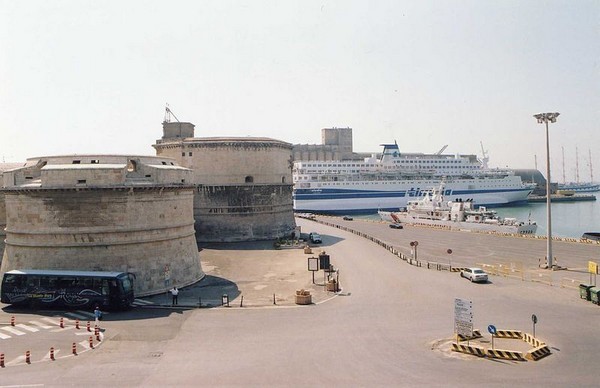 The modern city was built over a pre-existing Etruscan settlement.

The harbour was constructed by the Emperor Trajan at the beginning of the 2nd century. The first occurrence of the name Centum Cellae is from a letter by Pliny the Younger (AD 107). The origin of the name is disputed: it has been suggested that it could refer to the centum (“hundred”) halls of the villa of the emperor.

In the high Middle Ages,[citation needed] Centumcellae was a Byzantine stronghold. Raided by the Saracens in 828, it was later acquired by the Papal States.

The place became a free port under Pope Innocent XII in 1696 and by the modern era was the main port of Rome. The French occupied it in 1849. On 16 April 1859 the Rome and Civitavecchia Rail Road was opened for service. The Papal troops opened the gates of the fortress to the Italian general Nino Bixio in 1870.